Ronald C. Lasky, Ph.D., PE is currently a senior technologist at Indium Corporation, an instructional professor of engineering at Dartmouth College, and a consultant with ITM. Prior to these assignments, he had over 30 years of experience in electronic and optoelectronic packaging and assembly at IBM, Universal Instruments, and Cookson Electronics.

He has authored or edited six books on science, electronics, and optoelectronics and numerous technical papers and authored articles for Scientific American. Dr. Lasky holds numerous patent disclosures and is the developer of the several new concepts in SMT processing software relating to cost estimating, line balancing, and process optimization. He is the co-creator of engineering certification exams in electronic assembly and the Director of Dartmouth’s Lean Six Sigma Program. Ron was awarded the Surface Mount Technology Association’s Founder’s Award in 2003.

Maggie Benson’s Journey: Can a Dirty Factory Be Fixed?

Editor’s note: Indium Corporation’s Ron Lasky continues this series of columns about Maggie Benson, a fictional character, to demonstrate continuous improvement and education in SMT assembly. In this installment, Maggie and John, new owners of Benson Electronics, are speaking with Professor Patty Coleman about adding more lines through an acquisition of Ivy Electronics. But why is Patty down on Ivy Electronics?

“Yikes! What is wrong with Ivy Electronics?” Maggie implored.

“It would be easier to ask what is right with that flea bag company!” Patty exclaimed.

“Can you be more specific?” John inquired, sheepishly.

Patty paused, then said, “I’m sorry if I am speaking too negatively. When I worked with ACME, Mike Madigan (the CEO) asked me to perform an audit to see whether ACME should buy Ivy Electronics. The conclusion was a resounding no. The equipment was worn out, the owner was abrasive and difficult to deal with, and the staff had little training and very poor morale.”

“From our preliminary analysis, none of these surprise us,” Maggie said.

“Well, then, why are you interested in buying it?” Patty asked.

“Our business is booming and even with our dramatic improvement in uptime, we are turning away business,” John responded. “We could use the two lines that Ivy Electronics has to offer.”

“Just be careful,” Patty said. “I would suggest a complete audit of their assembly equipment and the entire operation. Also, talk to the staff and look at the books. My sense is that the only way it could be a good deal is to get it for a low price.”

“Frank worked with us on the finances, and it seems the asking price is fair,” Maggie said.

“The owner, Ned Price, is a piece of work,” Patty said, then warned, “Be careful.”

Three days later, the Benson Electronics (BE) team of Maggie, John, Frank, and Chuck visited Ivy Electronics. They first met with two service technicians from the companies that manufactured the equipment in the two assembly lines.

The service techs planned to evaluate the state of the equipment for BE. The first issue the BE team noticed was the overall filthiness of the shop floor. Frank used the restroom and commented that it was so disgusting that it felt violating. After the initial meeting with the service technicians, the BE team continued by visiting with Ned Price, owner of Ivy Electronics, in his office. He was waiting for them, along with another staff member. 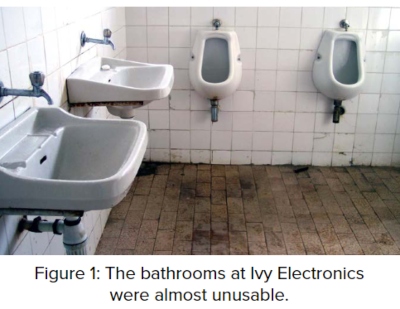 The BE team introduced themselves.

“We were hoping we could look around the shop, and chat with some of the staff,” Maggie cheerfully requested.

“Talking to the staff would be a waste of time,” Ned responded with an obvious amount of disgust. “Most of them are dumb losers. Phil, here, is the best of the lot, and he’s nothing to write home about.” Phil remained stoic.

The BE team was stunned. Ned seemed like an unpleasant person at a minimum.

“Well, we will want to chat with a few of them anyway,” John said, firmly.

“Suit yourself,” said Ned. “But they really are all losers. You can start your conversations with Phil here.”

The BE team found a small conference room to chat with Phil.

After repeating introductions, Maggie said, “Phil, tell us about Ivy Electronics and your role here.”

Phil seemed reluctant to open up, and John sensed this first.

“Phil, we are likely going to buy the company,” John said, reassuringly. “Anything you say is between us and won’t be disclosed to Ned.”

The relief on Phil’s face was palpable.

“I’m the lead technician,” Phil began. “I set up new jobs and manage the operators. I also do some on-the-job training on how to run the machines.”

“Is there any formal training?” Chuck asked.

“No,” Phil responded. “Mr. Price says training is expensive and takes time away from the operators running the machines.”

Frank then spoke up, “I’ve noticed that the facility is really filthy. The restrooms stink and they are almost unusable. What is the story on that?”

“Mr. Price says it is too expensive to hire cleaning staff, so any cleaning is done by myself and the operators during breaks,” Phil responded. “If we don’t bring in toilet paper and soap, there is none. I also believe the bad odor may be because the sewage system needs repair.”

“Phil, the pay here is quite low. Why do the people stay?” Frank asked.

“Most of them don’t have high school degrees, and with Mr. Price constantly berating them, I believe they don’t feel capable of being hired elsewhere,” Phil answered.

“How is the assembly equipment?” John asked.

“That is our biggest challenge,” Phil told the group. “Mr. Price doesn’t want to pay for service, so we spend a lot of time keeping the equipment limping along.”

Maggie and John continued talking with Phil and then with a few other staff members, while Chuck and Frank walked around the facility to investigate.

At the end of the day, the four got together with the assembly equipment service technicians to summarize what they had learned.

“What do you two think about the equipment here?” Maggie asked the two service techs. Fred Dempski and Ron Johnson.

“We both agree all of the equipment is just about shot,” Ron said.

“There is so much dried solder paste on the printer, we will need chisels to get it off,” Fred told him.

“We can keep the equipment limping along for six months,” Fred said, while Ron added, “But you should have a plan to replace the equipment on both lines.” 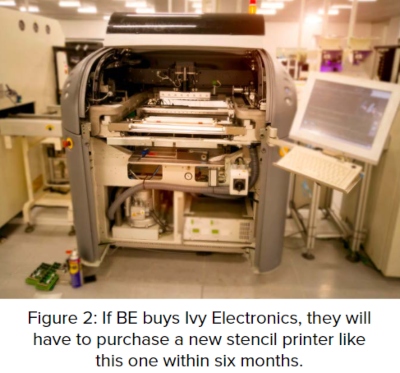 After a bit more discussion about the equipment, the group went on to the other issues.

“The operation has considerable challenges along the lines of 5S1 and the Seven Mudas2,” Chuck stated.

Chuck was one of the company’s experts in Lean Six Sigma, having recently earned his Green Belt, so 5S and the Seven Mudas were natural for him to comment on.

“Something definitely needs to be done about morale,” Maggie added.

“The place needs a thorough cleaning,” Frank chimed in.

Will BE buy Ivy Electronics? What will the price be? What is in the action plan? What is 5S and the 7 Mudas? Stay tuned to find out the answers to these questions and more.

Note from Dr. Ron: I know this story about Ivy Electronics seems too hard to believe. You might think no company could be so bad. However, the facts of the story are from an audit of an electronics assembler that I performed quite a few years ago. The bathroom story is also true.

This column originally appeared in the January 2022 issue of SMT007 Magazine.

Download The Printed Circuit Assembler’s Guide to… Solder Defects by Dr. Ronald C. Lasky. You can also view other titles in our full I-007eBook library here.

Maggie Benson’s Journey: Can a Dirty Factory Be Fixed?

Indium Corporation’s Ron Lasky continues this series of columns about Maggie Benson, a fictional character, to demonstrate continuous improvement and education in SMT assembly. In this installment, Maggie and John, new owners of Benson Electronics, are speaking with Professor Patty Coleman about adding more lines through an acquisition of Ivy Electronics. So, why is Patty down on Ivy Electronics?

In this fictional account of Maggie Benson, Indium Corporation's Ronald C. Lasky explores continuous improvement themes. This month, after reviewing the company's success with improving uptime, he introduces the idea of a Pareto chart which shows the yield fallout by failure mode types.

Editor’s note: Indium Corporation’s Ron Lasky continues this series of columns about Maggie Benson, a fictional character, to demonstrate continuous improvement and education in SMT assembly. Maggie was working in her office, deep in concentration, when she was startled by the phone ringing. It was her mentor, Professor Patty Coleman from Ivy University. Maggie reached to answer the phone. “Hi Prof…,” Maggie started, “Patty.” “Well, Maggie, we still need a little work on you calling me Patty,” Patty said, chuckling. “I am calling to thank you again for taking my family to Mount Ascutney to view the Milky Way. Rob, our boys, and I really enjoyed it. I didn’t consider that the new moon might be the best time for viewing. It was also neat to see Venus. I was unaware that Venus is in the Western sky after sundown because it is closer to the sun than the earth.”

Ronald Lasky continues his series on continuous improvement through this series with fictional character Maggie Benson. Here, he explains that with increased productivity, each unit produced is cheaper to make and you have more of them, so profits increase exponentially.

As the story continues, Maggie meets with Professor Patty Coleman, and finds something new to chat about. Back at Benson Electronics, the team is meeting about uptime on the line. What's new there?

Maggie Benson's Journey: What is Your Uptime?

In this fictional account meant to discuss continuous improvement methods, character Maggie Benson reviews the urgency of improving uptime on the lines with one of her employees.

In this fictional account, Maggie Benson's time on the golf course with her professor leads to important improvements at the factory.

In Part 2 of Dr. Ronald Lasky's fictional account of Maggie Benson, Benson Electronics learns of the change in ownership, while Maggie and John evaluate making some changes.

Indium Corporation’s Ronald C. Lasky has launched this series of columns about Maggie Benson, a fictional character, to demonstrate continuous improvement and education in SMT assembly.)